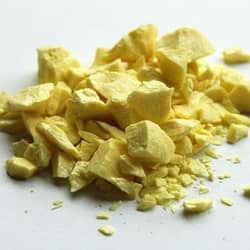 Brief Overview
Sulfur (or sulphur) is an abundant, naturally occuring, multivalent non-metal. Sulfur is an essential element for all life, and is widely used in biochemical processes. In metabolic reactions, sulfur compounds serve as both fuels (electron donors) and respiratory (oxygen-alternative) materials (electron acceptors). Sulfur in organic form is present in the vitamins biotin and thiamine, the latter being named for the Greek word for sulfur. Sulfur is an important part of many enzymes and in antioxidant molecules like glutathione and thioredoxin. Organically bonded sulfur is a component of all proteins, as the amino acids cysteine and methionine. Disulfide bonds are largely responsible for the mechanical strength and insolubility of the protein keratin, found in outer skin, hair, and feathers, and the element contributes to their pungent odor when burned.

Manufacturing Process
Elemental sulfur was once extracted from salt domes where it sometimes occurs in nearly pure form, and is extracted using Frasch process. In this method, superheated water was pumped into a native sulfur deposit to melt the sulfur, and then compressed air returned the 99.5% pure melted product to the surface. Throughout the 20th century this procedure produced elemental sulfur that required no further purification. However, due to a limited number of such sulfur deposits and the high cost of working them, this process for mining sulfur has not been employed in a major way anywhere in the world since 2002.
Today, sulfur is produced from petroleum, natural gas, and related fossil resources, from which it is obtained mainly as hydrogen sulfide. Organosulfur compounds, undesirable impurities in petroleum, may be upgraded by subjecting them to hydrodesulfurization, which cleaves the C–S bonds:
R-S-R + 2 H2 → 2 RH + H2S
The resulting hydrogen sulfide from this process, and also as it occurs in natural gas, is converted into elemental sulfur by the Claus process. This process entails oxidation of some hydrogen sulfide to sulfur dioxide and then the comproportionation of the two:
3 O2 + 2 H2S → 2 SO2 + 2 H2O
SO2 + 2 H2S → 3 S + 2 H2O

Food Industry
Small amounts of sulfur dioxide gas addition (or equivalent potassium metabisulfite addition) to fermented wine to produce traces of sulfurous acid (produced when SO2 reacts with water) and its sulfite salts in the mixture, has been called "the most powerful tool in winemaking. After the yeast-fermentation stage in winemaking, sulfites absorb oxygen and inhibit aerobic bacterial growth that otherwise would turn ethanol into acetic acid, souring the wine. Without this preservative step, indefinite refrigeration of the product before consumption is usually required. Similar methods go back into antiquity but modern historical mentions of the practice go to the fifteenth century. The practice is used by large industrial wine producers and small organic wine producers alike. Sulfur dioxide and various sulfites have been used for their antioxidant antibacterial preservative properties in many other parts of the food industry also. The practice has declined since reports of an allergy-like reaction of some persons to sulfites in foods.

Detergent Industry
Sulphur is present in laundry detergents as sodium sulphate and minor other compounds. Sodium sulphate is often used as filler with larger quantities used in standard laundry powders than concentrates.

Fertilizer
Elemental sulfur is hydrophobic and therefore, cannot be directly utilized by plants. Over time, soil bacteria can convert it to soluble derivatives, which can then be utilized by plants. Sulfur improves the use efficiency of other essential plant nutrients, particularly nitrogen and phosphorus. It is one of the major nutrients essential for plant growth.

Other Application
Sulfur is also a component in fungicides and pesticides. As a bactericide, sufur is an essential tool in wine making and food preservation.