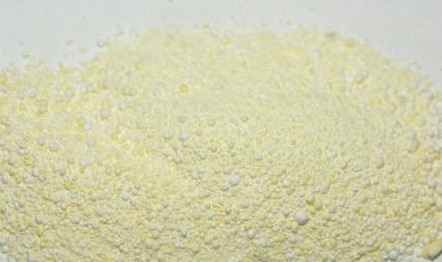 Sodium peroxide is an inorganic compound. It is a sodium product that is ignited in excess oxygen and turned into a yellow, granular form. This substance acts as a strong basic anhydride and can therefore react with acids and with strong reducing agents in redox reactions. It is highly insoluble thermally stable sodium source suitable for glass, optic and ceramic applications. Its octahydrate form, which is simple to prepare, is white, in contrast to the anhydrous material.

Sodium peroxide can be prepared on a large scale by the reaction of metallic sodium with oxygen at 130–200 °C, a process that generates sodium oxide, which in a separate stage absorbs oxygen.

It is popularly used to bleach woxxczod pulp for the production of paper and textiles.

It can be hydrolyzed to give sodium hydroxide and hydrogen peroxide according to the reaction.

It is used to dye and print textiles.

It is used in rendering air charged with carbon dioxide respirable as in torpedo boats, submarines, diving bells.

It serves as a catalyst in the polymerization of styrene to polystyrene.

This can sometimes be used as an intermediate in the synthesis of sodium perborate and sodium carbonate peroxohydrate, which are used as bleaching agents in the paper and textile industries.

It can be found as an ingredient in disinfectants, antispetics, and pharmaceutical products.