Out of the 20 L-amino acids, ecumenically found in most of living organisms, L-lysine is one of the 9 amino acids which are essential for human and animal nutrition. L-lysine is useful as medicament, chemical agent, food material (food industry) and feed additive (animal food). Its demand has been steadily increasing in recent years and several hundred thousand tons of L-lysine (about 800,000 tones/year) are annually produced worldwide almost by microbial fermentation.

L-Lysine is mainly produced by fermentation using strains of Corynebacteria, especially Corynebacterium glutamicum, which comprises a multi-step process including fermentation, cell separation by centrifugation or ultra-filtration, product separation and purification, evaporation and drying.

L-Lysine is used as nutritional supplement in Agriculture/Animal Feed/Poultry feed. Lysine is an important additive to animal feed because it is a limiting amino acid when optimizing the growth of certain animals such as pigs and chickens to produce meat. 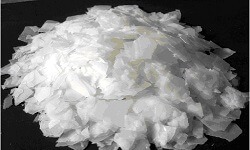